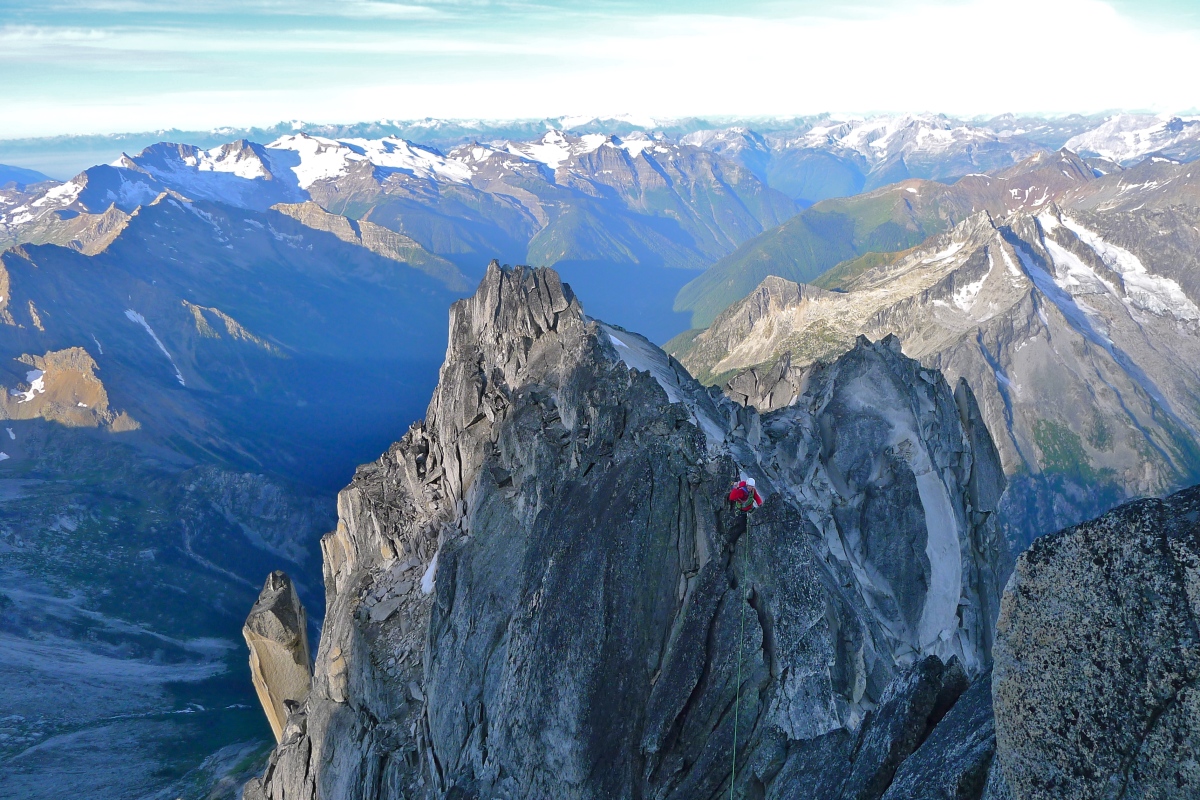 “You cannot stay on the summit forever; you have to come down again. So why bother in the first place? Just this: What is above knows what is below, but what is below does not know what is above. One climbs, one sees. One descends, one sees no longer, but one has seen.”

We were only two pitches off the ground, but it was already decision time. Overhead, a short roof loomed, with crack systems wending around either side. Each fissure shot in a different direction up the incomprehensible jumble of the North Howser Tower’s lower west face, in a remote basin of British Columbia’s Bugaboos. Two-dozen rope lengths above, we could make out the amazing dihedral that would take us to the summit ridge and the top of the mountain.

But conditioned to detailed topos and precise route-finding beta of more trafficked routes and climbing areas, I struggled with the simple text description that read, “connect cracks, trying not to get pulled too far left, for 10 or so pitches.” Of course we chose the left-hand crack system.

Two hundred feet after committing to the left-hand crack, a beautiful, (left-angling) splitter tempted us higher. We climbed it, but our excitement over the enjoyable pitch was quickly doused by the reality that we were indeed, off-route. We needed to get back right, but an incipient seam was all that rose above us. If we bailed now, we were looking at a heinous, semi-technical circumnavigation of the Howser Towers to get back to camp. Up was out.

After our attempts to free climb right were bouted, some aiding up and over a short bulge on micro-cams led us to a fixed piton anchor—a rusted antique from a route-finding error of a different era. One of the pins came out of the crack with less effort than it takes to pull bread from the toaster, and neither of us said much. Almost instinctively, Rob slotted a nut in a nearby constriction, I cut cord to replace the bleached webbing, and we began to rig the rappel. Nearly 60 meters of sideways slab swinging later, I scampered onto a ledge and peered up at the gaping chimney that would lead us up and out of the convoluted lower face. Two days later, we strolled back into Applebee Camp, having lounged on the summit that morning.

Last July, I stood contemplating a similar Frost-esque divergence, this time at work. By the graces of corporate reorganization, I was offered a choice—accept a new position that seemingly involved more spreadsheets than writing, or see what the outside world had to offer. For years I had dreamed of the chance to work for myself, make my own schedule and live on my own terms, and here it was. On the other hand, I enjoyed the reliability of a steady paycheck, and felt comfortable with my job and co-workers.

I thought back to the day in the Bugaboos, and the countless parallel experiences I’ve had in the mountains—pointed moments of decision where I’ve take what I know, what I want, and what I’m willing to give up, and chosen the best course of action. It took me a few days to make the call, but I think I walked out the door knowing in my heart that I wasn’t coming back. In the end, I had to know what it was like out there.

While major decision-making often feels much more complex in real life, it usually revolves around the same basic themes as decisions we make in climbing—the value we place on security, our fear of the unknown, and knowledge of our skills and competency. We choose a path in order to make upward progress. Sometimes we don’t know if path we’ve chosen is the right one, sometimes it dead ends, sometimes we fall, and sometimes we have to go down and reassess. But most of the time, we just have to put our heads down, try not to freak the fuck out, and keep climbing.

I still have the piton we removed from the crack, and it sits on top of my bookshelf, reminding me not only of a great adventure with a good friend, but of the innate human ability—my ability—to course correct, to think on the fly, to deal with the unexpected. I’ve had good days and bad ones since I pulled the occupational ripcord. There have been big checks with my name on them, and there have been times when I’ve stared for hours at a blank computer screen, gripped by the icy hands of fear and self-doubt. But the excitement and beauty of the unknown is why I go climbing, and it’s why I turned and walked out on a steady job that day. Did I make the right decision? Well, I’m still making upward progress, and for now, that’s reason enough not to bail.